In 1997, I made a pilgrimage to Birchington-on-Sea, Kent, England, to pay my respects at the grave of Gabriel Rossetti, the English painter, poet and charismatic co-founder of the Pre-Raphaelite Brotherhood. 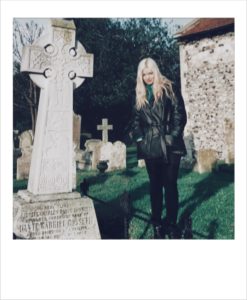 Gabriel was convalescing from an illness when he died in Birchington. 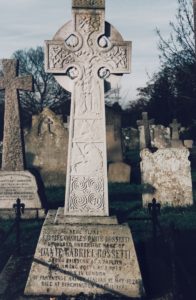 His family and his wife, Lizzie Siddal, are buried in Highgate Cemetery in London. It always seemed to me very sad that Gabriel wasn’t laid to rest near his family and Lizzie. 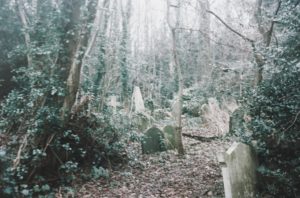 Was it due to his guilt over having dug up his dead wife’s coffin seven years after she died to retrieve a volume of poetry he buried with her? The exhumation and retrieval of the worm-eaten book of poems is one of many sensational stories swilling around the Pre-Raphaelite Brotherhood and their life models. 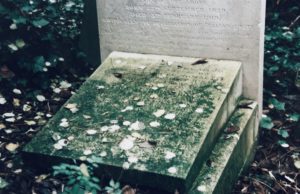 I also visited Lizzie Siddal’s grave at Highgate on a private tour. After years of being obsessed with the Pre-Raphaelites, it was an emotional experience to see the final resting places of these fascinating personalities who continue to inspire the work of artists across time. 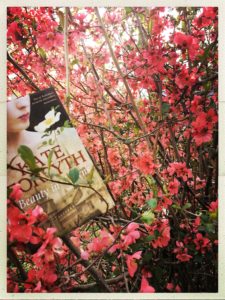 I was reminded of Gabriel and Lizzie reading Kate Forsyth’s current book, Beauty in Thorns, which I devoured in a few nights. Beauty in Thorns tells the story of the tangled lives and loves surrounding the famous painting, The Legend of Briar-Rose by Edward (Ned) Burne-Jones. Jones was obsessed with the Sleeping Beauty myth which Kate parallels with the lives of the PRB and their wives, muses, mistresses and daughters. His finished work was rapturously received in 1890 and earned the artist a staggering (for the time) 15,000 guineas. In 1893 he was knighted. 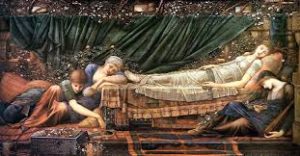 Beauty in Thorns is a very ambitious project but is perfectly suited to Kate with her love of the Pre-Raphaelite Brotherhood, poetry, mythology and fairy tales. The story is told via four different women (stunners, as they were known by the artists): 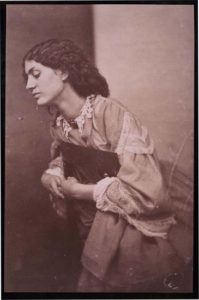 Jane Morris nee Burden, a child of the slums, adored by both Rossetti and William ‘Topsy’ Morris whom she married. Later, with the permission of the wonderfully understanding Topsy, she carried on an affair with Gabriel at Kelmscott Manor in the summer of 1871 while Topsy travelled to Iceland. 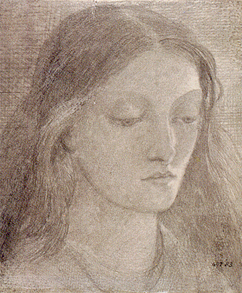 Lizzie Siddal who had art and poetry aspirations but whose art was never taken seriously, and who suffered an addiction to laudanum and what appears to be an eating disorder. 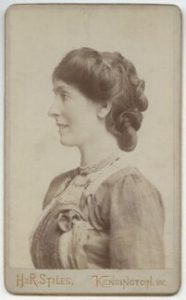 I was very taken with Georgie’s character as I knew  little about her, being previously more interested in Lizzie and Fanny Cornforth. I was disappointed that Fanny was only touched upon in the story as I’ve always felt very drawn to her, but I read in a blog post of Kate’s that, with regret, she had to cut Fanny as she already had too many viewpoints and a very large manuscript. 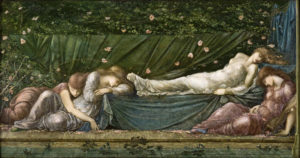 Georgie was wonderfully portrayed. She had to endure a lot from her husband and his affair with the incredibly flamboyant Maria Zambaco, but she managed to keep her relationship strong with Ned. Georgie was interested in socialism and in trying to make the world a better place for women. Margot was her father’s muse  for her fairy-tale painting of Sleeping Beauty. 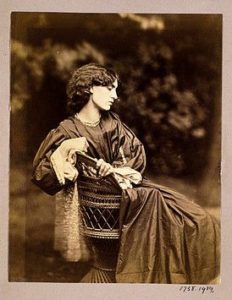 For people who may already be familiar with the stories and scandals surrounding the Pre-Raphaelite Brotherhood,  Beauty in Thorns will still enthral with the skilful way Kate blends the strands of these very different women and their life experiences together. It is fascinating to see the Brotherhood through the eyes of the women in their sphere and how they influenced the artists.  Kate really brings out a more empathetic dimension to the women. As unorthodox as the Brotherhood, they modelled for the artists at a time when to do so was considered equal to being a prostitute, but they were happy to defy convention. 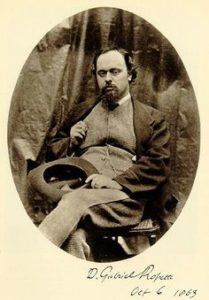 If you come to the book with little or no knowledge of these talented, innovative young men and the women who inspired them, you will be enlightened as Kate really brings the world of the artists to life. 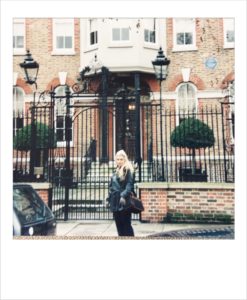 Outside 16 Cheyne Walk London where Rossetti lived from 1862

The research in Beauty in Thorns is incredibly detailed, although never at the expense of the story. Kate had a couple of research trips to the UK and she has read unpublished poetry of Gabriel Rossetti’s to Jane in the Specials Collections Reading Room at Bodleian Library at Oxford. This attention to primary research really shows through in Beauty in Thorns. I can’t imagine how beautifully moving it would have been to read Gabriel’s passionate poetry in his own hand. 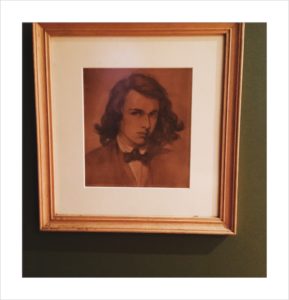 Rossetti’s dashing self portrait which hangs in my front room

I had no idea, about Mummy Brown paint, a mindboggling detail that really shocked me. And William Morris wallpaper sales being badly affected by the arsenic scandal.  I loved Kate’s hypothesis that Jane’s ill-health in London may well have been due to arsenic-treated William Morris wallpapers. Jane Morris’s symptoms are the same as arsenic poisoning. From Kate’s fascinating blog on this topic HERE 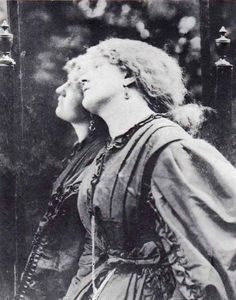 Lizzie’s childhood was filled with cruelty with her mother’s taunts about how plain she was. It must have been overwhelming to have been accepted as a Stunner by Gabriel and his fellow artists, but it came at a price. Her descent into laudanum is poignantly captured in the book. When Kate first came to writing Beauty in Thorns, she believed that Lizzie had committed suicide but as she continued to work on the book, she changed her mind. Her blog post on this can be found HERE. 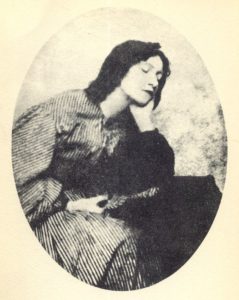 Kate also became convinced through her research and reading diaries and letters of the period that Lizzie did suffer from an eating disorder. Anorexia nervosa was not recognised in the mid-19th Century and was thought to be consumption. 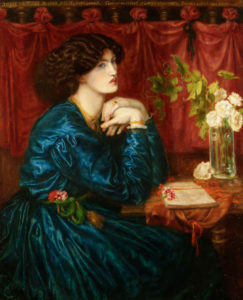 Previously, I’d never felt particularly drawn to Jane Morris, but Beauty in Thorns helped me view her in a different light. Like Lizzie, she had a harsh childhood. She was forced to be sexually active from the age of nine, and had to wring the necks of pigeons for the dinner pot. Jane had to work on her lower-class accent and rough ways to be accepted into Topsy’s world. 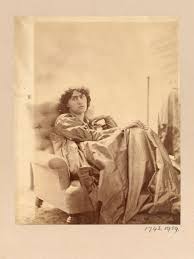 Eating an orange for the first time becomes an overwhelming sensory experience for Jane: ‘Jane ate it greedily, then another, trying to think what it tasted like. Sitting with the sun on your back on a hot summer’s day. Orange hawkweed growing out of a crack in a churchyard wall. The sound of singing in a hayfield as women raked the mown grass into piles. The glint of a new sovereign.’
I also had no idea that her later years with her children were as traumatic with her daughter’s tragic onslaught of epilepsy.
Kate’s skill with recreating the world she is writing about is paramount to this book. Deft touches really make you appreciate what it was like to be a woman at this particular time.
I loved Beauty in Thorns and I think it is one of my favourite of Kate’s books. 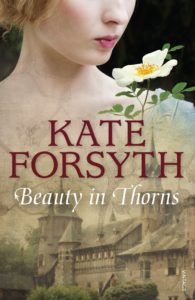 I’ve been reading and enjoying her work since The Witches of Eileanan was published with the first book Dragonclaw in 1997. 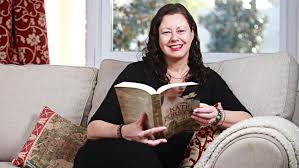 I feel very grateful to have seen both Gabriel’s and Lizzie’s graves. I carried flowers to Rossetti and I admit to weeping a few tears over his and Lizzie’s graves. May their vibrant, passion and energy continue to dazzle and inspire artists and writers around the world with their wild, idealistic visions of a more colourful, beautiful word. 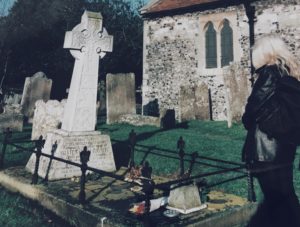