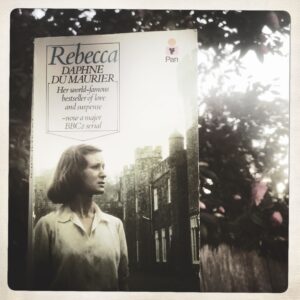 This weekend it snowed in the Blue Mountains, always a joyful event. I spent the time in bed with the fire glowing (no cosier sight), snowflakes drifting outside, wind gusting, dog snoozing beside me, lost in the gothic world of Daphne du Maurier’s Rebecca. 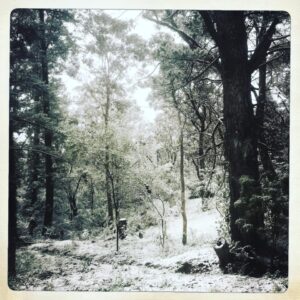 I’ve read Rebecca several times in my life, and just like my favourite of her books, My Cousin Rachel, my perception of it shifts as I’ve grown older. 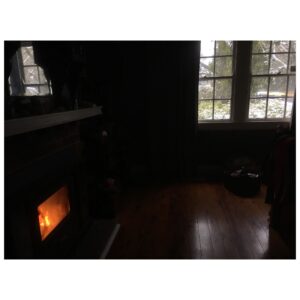 Rebecca opens on an iconic cracker of a line: ‘Last night I dreamt I went to Manderley again.’

The scene is set for a strange, dreamlike world where everything seems so normal on the outside, but unsettling undercurrents are evident.

The narrator is an unnamed young woman. Daphne set herself the technical challenge of not awarding her a Christian name. We first meet the narrator in Monte Carlo where she is a paid companion to the snobby and wonderfully portrayed Mrs Van Hopper. The narrator meets Maximilian (Maxim) de Winter, who is recovering from his first wife’s (Rebecca) death a year before in a boating accident. 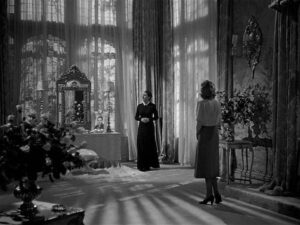 After a rushed courtship, Max proposes to the narrator and despite grim predictions from Mrs Van Hopper, the woman travels to Cornwall, to Maxim’s grand home, Manderley.

Mrs Danvers, the grim housekeeper, who was devoted to Rebecca, carries malice towards the new Mrs De Winter and goes out of her way to ensure the new bride can’t relax in her role. Everyone the narrator meets praises Rebecca extravagantly and the Narrator becomes more cowed and insecure. 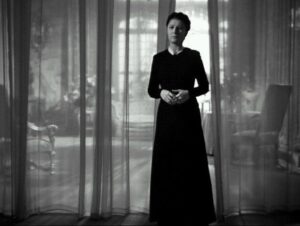 Maxim becomes more distant and after a disastrous masked ball where Mrs Danvers spitefully excels herself by encouraging the Narrator to dress in the same costume Rebecca had worn at the previous ball just before her death, causing Maxim to retreat further.

After a shipwreck occurs, a second boat is uncovered – Rebecca’s sailing boat with Rebecca’s body in it. Suspicion is cast upon Maxim, as he previously identified a body found washed up on the coast as Rebecca.

The twists continue until the grim ending which contains lines just as potent and evocative as the opening.

‘There was no moon. The sky above our heads was inky black. But the sky on the horizon was not dark at all. It was shot with crimson, like a splash of blood. And the ashes blew towards us with the salt wind from the sea.’

Daphne du Maurier began Rebecca in late summer 1937 when she was stationed with her husband Tommy ‘Boy’ Browning in Egypt. Tommy was the Lieutenant Colonel of the Grenadier Guards. 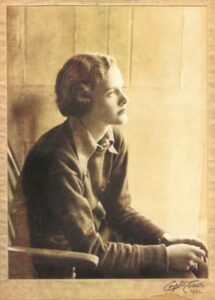 Daphne made slow progress on the book in Egypt and on their return to England in December she spent Christmas away from her family to finish Rebecca. The book was published by Victor Gollancz in April 1938.

Daphne was toying with themes of jealousy. Tommy had been engaged to marry a beautiful, dark-haired woman, Jan Ricardo. Daphne found herself obsessively thinking about Jan, and comparing herself unfavourably.

Like the narrator in the book, Daphne was introverted, disliking social events and small talk, whereas Jan/Rebecca were extroverted, flamboyant glamorous women. Daphne had found and read old letters between Tommy and Jan and was struck by the self-assured tone of her predecessor and the florid way she signed the R in her correspondence compared to her own spidery writing. Rebecca has this trait in the novel. Tragically, Jan Ricardo committed suicide at 39, throwing herself under a train on August 4, 1944.

Daphne was surprised by Rebecca’s popularity – and also that it was marketed as a romance. Today it is seen as a gothic psychological thriller.

On this read, I was struck by how passive the narrator is. Her very passiveness gives her power. I found myself empathizing more with the absent Rebecca. Even before arriving at Manderley, the narrator is ripping out pages from books that Rebecca has inscribed with her distinctive R. She began to irritate me with her inability to stay in the present and her paranoia.

When Maxim reveals his secret to his second wife, she barely seems to care about his admission.

I also had a lot more empathy for the archetypal crone, Mrs Danvers. She is loyal to her first mistress and she probably guessed the truth of what happened at Manderley. She genuinely mourns Rebecca and it must have appalled and infuriated her that Maxim marries such a young woman a year later. 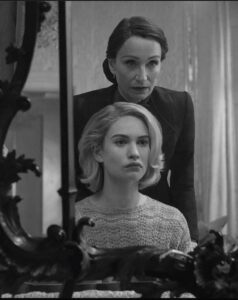 There is something sickly and rotten about Manderley and its inhabitants. The overlong driveway with overgrown red rhododendron bushes. The sprawl of rooms with a web of secrets contained within. 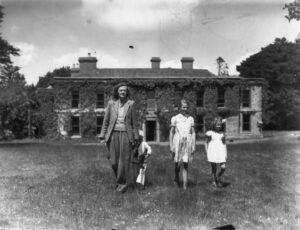 Daphne and her children at Menabilly

Manderley – a conglomeration of Milton Hall in Cambridgeshire, where Daphne visited as a child and Menabilly, a Cornish estate that obsessed Daphne and which she leased from the Rashleigh family – has gripped readers since its first publication. She called Menabilly ‘her house of secrets’ and she loved it, as she admitted, more than she loved people.

‘That corner in the drive too, where the trees encroach upon the gravel, is not a place in which to pause, not after the sun has set. When the leaves rustle, they sound very much like the stealthy  movement of a woman in evening dress, and when they shiver suddenly, and fall, and scatter away along the ground, they might be the patter, patter, of a woman’s hurrying footstep, and the mark in the gravel the imprint of a high-heeled satin shoe.’

The writing is atmospheric and the words convey a haunting, ominous beat. There is a terrible inevitability to where the novel is leading us. ‘Rebecca has won,’ Maxim says at the novel’s closing chapter.

Rebecca is a dark novel filled with complex characters and shadows. I’ve no doubt that when I re-read it in another five years or so, I’ll have a different perspective on it. 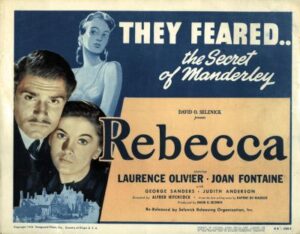 The novel has been in print since 1938. In 2017, it was voted the UK’s most popular book of the last 225 years. It’s been adapted for film and television several times and we will see a new adaption in 2020 from Netflix. Not bad for a novel that Daphne declared in a letter to her editor when finishing:

‘Here is the book. I’ve tried to get an atmosphere of suspense. It’s a bit on the gloomy side. The ending is a bit brief and a bit grim.’ 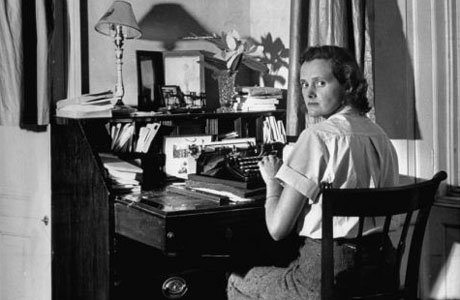 “We are all ghosts of yesterday, and the phantom of tomorrow awaits us alike in sunshine or in shadow, dimly perceived at times, never entirely lost.”  ―    Daphne du Maurier,    Myself When Young: The Shaping of a Writer