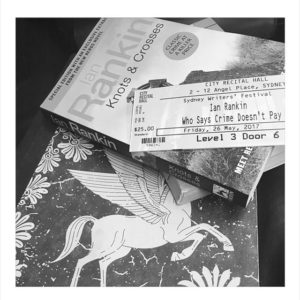 Never leave securing tickets for the hot sessions! By the time I booked, only two seats remained – both in such elevated positions I expected Michael and Ian to do a pre-flight safety demonstration before we taxied over their heads. 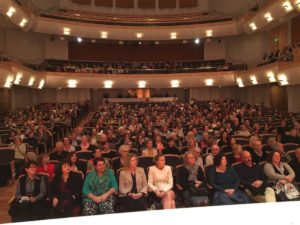 Despite the vertigo, the hour was engrossing and inspiring. Ian was candid, witty, and clever and Michael was a terrific interviewer – his journalistic experience was in evidence as he led the conversation but still managed to keep himself back.
I’ve paraphrased below some of Ian’s talk (I was so engrossed in the conversation I missed a lot). This is my own version, so please keep that in mind. You really had to be there to hear Ian’s Scottish accent to appreciate it more. I’ve also added a few details from a 2009 Times interview. 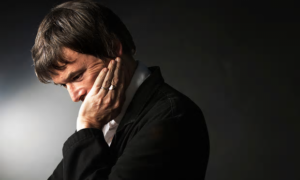 I.R spoke about the years when he didn’t think his career as a writer was ever going to happen. He’d published quite a few books but they were languishing in the midlist. One of his lowest points was when he went into his local bookshop after he had about five books published, to discover none of his books were on the shelf. The books of a rival crime writer in the same city featured prominently and when Ian commented, the owner said, ‘But he sells extremely well.’ M.R then related his own story of when he asked his publishers why his books weren’t in a shop and was told they were trying to create a ‘vacuum’. Ian then laughed, quipping that’s exactly what we want! A vacuum.

Five publishers turned down Knots & Crosses. I always love stories of publishers getting it wrong… 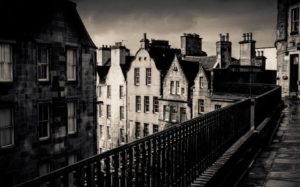 Ian was in London at this stage. He had a job and was writing on the side, with his wife Miranda Harvey the main breadwinner. His first royalties were so mediocre that Miranda (who sounds an incredible powerhouse and support) suggested moving out of expensive London. They hoped Miranda could support Ian’s writing by teaching English in the French countryside while they grew vegetables and lived a self-sufficient life on a farm in Dordogne. Well, that was the plan, but unfortunately in the French village they moved to, the locals weren’t interested in learning English. 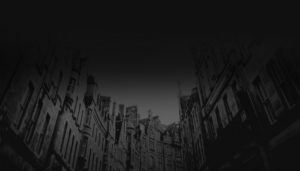 M.H is the daughter of two university lecturers, and according to the Times 2009 interview, had just started a course in Ancient Greek with Open Uni because she wanted to read Homer in the original. Ian describes his wife as the brains of the family. Ancient Greek would have been her fourth degree. She has also studied psychology. Miranda said she never thought Ian would become as famous as he is. But she always believed writing was a perfectly reasonable career and never saw it as a hobby or as a waste of time, even if it didn’t prove to be a big earner.

The couple had two sons, Jade and Kit, during this time. Very tragically, Kit was born with Angelman Syndrome, a rare genetic condition with severe disabilities – he was partially sighted and unable to speak or walk (in the Times interview, when Kit was fourteen, he was learning to walk). Due to all the stress Ian was having panic attacks and would go on all-night drives, screaming and shouting. He was also trying to write two books a year. 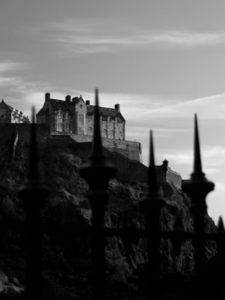 He wrote Black and Blue in 1997, the eighth of his Inspector Rebus books. Eight, a lucky number and the symbol of infinity, proved to be a breakthrough. It was his Big, Angry book. His Why Me, Why Us?
How many people would have given up on the third, fourth, (gulp) seventh book? 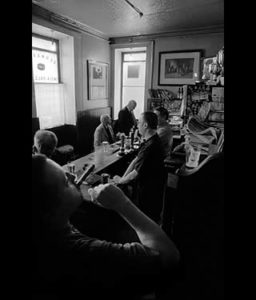 He knew he’d become successful when Miranda phoned him with his six-month royalty statement, saying it was a six-figure statement. The couple thought a mistake had been made but it turned out that his backlist had begun selling from readers newly hooked into Rebus’s world via Black and Blue. 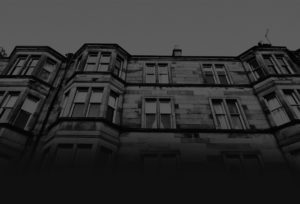 Ian said that he had to write, that it was therapy for him and that crime writers are all lovely people in real life because of the cathartic effect of their writing. You have to watch out for the Romance writers – they’ll stab you in the front! (I have to agree with him on this one. The crime writers I’ve met have, without exception, been the loveliest, most supportive people.) 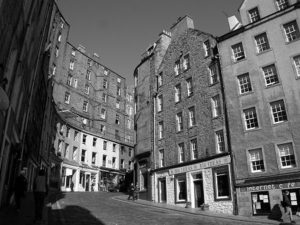 With the money that has since flowed to him, he can now provide Kit with the best equipment. 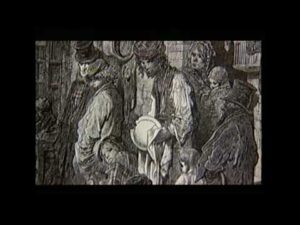 Michael asked about the  documentary, Ian Rankin’s Evil Thoughts, a three-part series about the nature of evil. Michael informed Ian that it is on Youtube. During the series Ian analysed cultural definitions of evil. He travelled to death row in Texas and spoke to inmates, examined Nature versus Nurture, and  was also exorcised at the Vatican by an Exorcist who had performed 15000 exorcisms. More chillingly, the crew arranged for him to speak to the mother of Ian Brady, the Moors Murderer, but Brady insisted that Ian only speak directly with him. 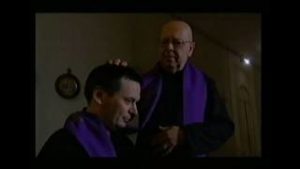 Ian declined, and when Michael asked why (I’d love to know whether Michael would have done it) Ian replied that once Brady was in your head, you’d never get him out. He described Brady as a seriously sick, clever, sadistic man. Brady wrote a book called The Gates of Janus which Ian said was a horrible book. Its subject matter is basically that serial killers should be revered. It’s banned in the UK, but available in the US. 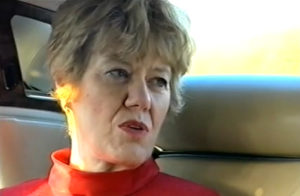 There were some killers Ian said he would be comfortable interviewing, such as the one-time killer Anne Perry (Juliet Hulme), who murdered the mother of her childhood friend, Pauline Parker, in New Zealand in the 1950s. The killing of Honorah Rieper has always really affected me terribly. I’ve always felt so much pity for the mother brutally killed by her daughter and Perry – girls she trusted. Just contemplating how much violence it would take to bash someone’s head in with a brick… 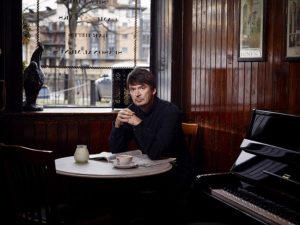 We had now reached the part of the evening when the audience asks questions. My plan was to sneak away and catch my country train back up the mountains. But Michael Robotham is a wily fox and onto this trick, and he requested that people actually ask questions and not make statements (I hate how there’s always someone who has to ramble on with some statement on these occasions; we need a hook to be rid of them so we can return to those whom we paid to see). But hurrah! The people brave enough to take the mic managed to keep me in my seat (at the risk of missing my train) by asking about Ian’s writing routine and other interesting questions. 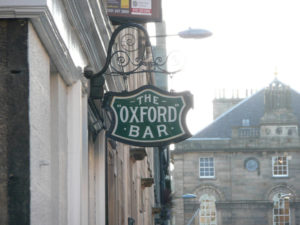 Ian said that when he’s writing, he goes to his house in Scotland where there’s no television etc and works solidly all day in peace and isolation. At night he goes to the local pub and has a simple meal like fish and chips. He writes the first draft as quickly as he can. He doesn’t know the ending of his books when he begins, just a little of the plot and the main characters. He uses his first draft to find out  what’s going on.
His advice for writing short stories is keep it crisp and have a great opening line.
He advised writers to try to have some fun. Writing should be fun. It should be like creating imaginary characters when you were young. 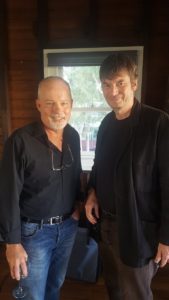 The session was recorded, and The Sydney Writers’ Festival should be adding it to their website, so if you enjoyed reading this far, you’ll be able to listen to the entire conversation. There was a wealth of inspiration for all creatives. Thank you to Ian Rankin (if he ever stumbles across this) for being so open and genuine and thank you to Michael Robotham for being such a terrific interviewer.  And yes, despite having to forfeit the endless signing queue line and battle the crowds who were thronging down to Circular Quay for the Vivid light display, I did catch my country train.
If you know of anyone who might be inspired and enjoy this post, please share.
Thank you for visiting,
Josephine
All black and white images used of Scotland via this book: Rebus’s Scotland A Personal Journey. photo credits. Ross Gillespie and Tricia Malley 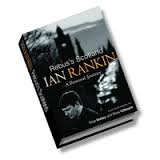