Yesterday I took an impulsive break from my edit and attended the very packed Nigella Lawson book signing at David Jones. 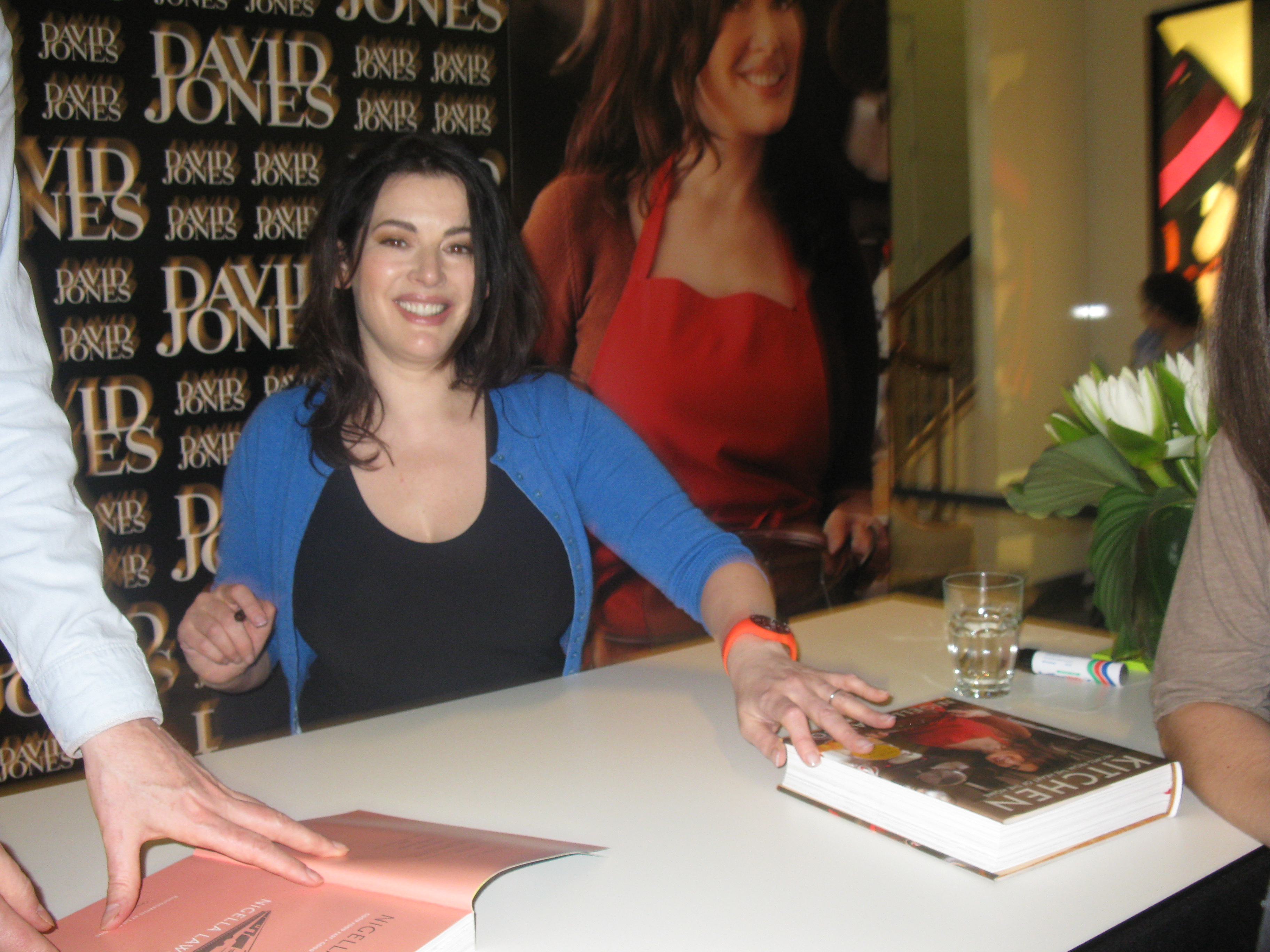 Ever the optimist, I jumped right on the end and began making new friends as we waited patiently in line for the domestic goddess herself.

It was a lot of fun to observe normally too-cool-for-school Sydneysiders going slightly crazy over Nigella. She is obviously well-loved in Sydney.

In our house alone, David loves her, as does my Daisy and I have all her cookbooks. Well, I have now that I bought Express yesterday. My middle-sister who has been going blind for years is also potty over Nigella and has been following her movements from her country house in Tasmania since she arrived.  I think she admires her for her tenacity in tough times as well as her domestic artistry when it comes to the kitchen. 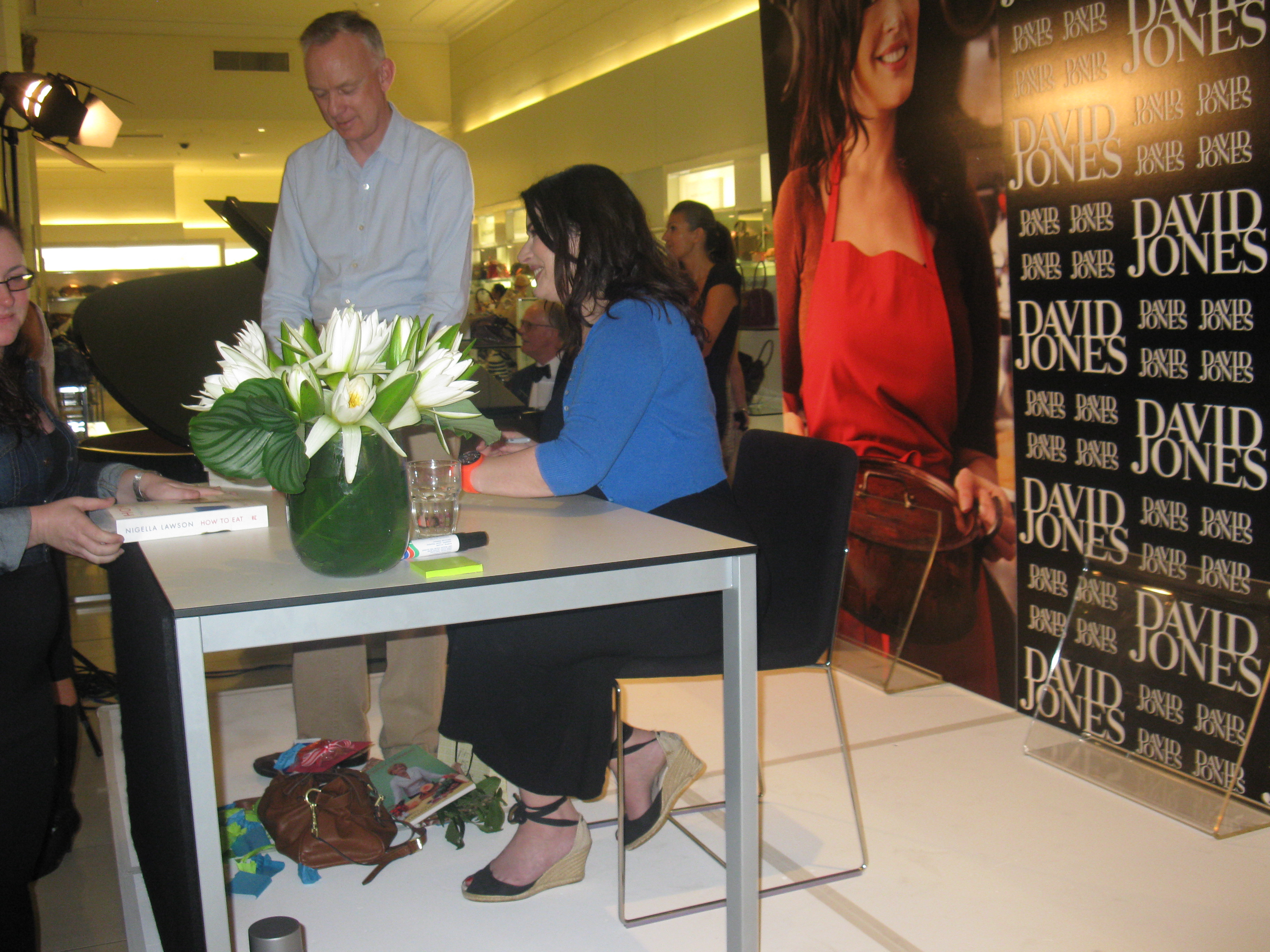 Amongst the madness and fun, the ever-game and smiling piano player played on in David Jones You can see a better post HERE where more shots were taken including of the smiley piano man .

A sales consultant had fainted. Whether from the excitement of Nigella or from the crowd, I’m not sure.

All good things come to those who wait. It was my turn to meet Nigella when the woman in charge realised I didn’t have my book purchased for her to sign. Total chaos! I quickly had to buy one from a valiant sales consultant.

And in the above image you see Nigella smiling at a scruffy looking writer as I threw myself at her like an excited puppy-dog. Note that big smile even though she has been smiling and signing for close to an hour by this stage.

And for those who are curious of what she was really like, I can divulge she has beautiful, pale skin, intelligent, kind eyes, and a very down-to-earth and warm persona. I was thrilled. Too often, I’ve met famous people who disappoint in real life but Nigella is the genuine article. She may adopt a character for the screen but her charm was sparkling through as she interacted with the people who had queued patiently to have their moment with her.

As I left the store, I was intrigued to see the staff member still lying on the floor nearly an hour later obviously waiting for the ambulance. Hopefully that woman is okay.

I remember when I saw Jerry Hall in the street once. I do love the very Sassy Jerry Hall and I was so impressed by her strut and the way she worked the gawking crowd. There were a bunch of workmen to who she waved and they began singing out to her. She was incredible. Being a person who tends to prefer to observe others, I’m often impressed by those who court fame. That Jerry Hall moment worked its way into my book when my bohemian writer, Pearl in the 1930s thread, struts her way down the main street of my Tasmanian sea-fishing village. Pearl may be clothed in the fashion of the 1930s but I was also seeing Jerry Hall as I wrote, long blonde hair swaying, high heels clicking as she sashayed through a modern-day Sydney street.

Who would you wait in queue for to grab a moment with? When it comes to celebrities it’s obvious I’d wait days for Johnny Depp, Tim Burton and Helena Bonham Carter.

But I was very glad I got a chance to finally meet the sensational Nigella!

Returning back to my edit, I submerged myself back into the world of Pencubitt in the 1930s and was surprised to have a call from the school. Was my daughter sick? No, she was waiting with the Office Reception as I had totally forgotten to collect her.

Such is the effect of the brush with fame for us mortals. I’ve never forgotten to collect my daughter and so that’s what I call the Nigella Effect.